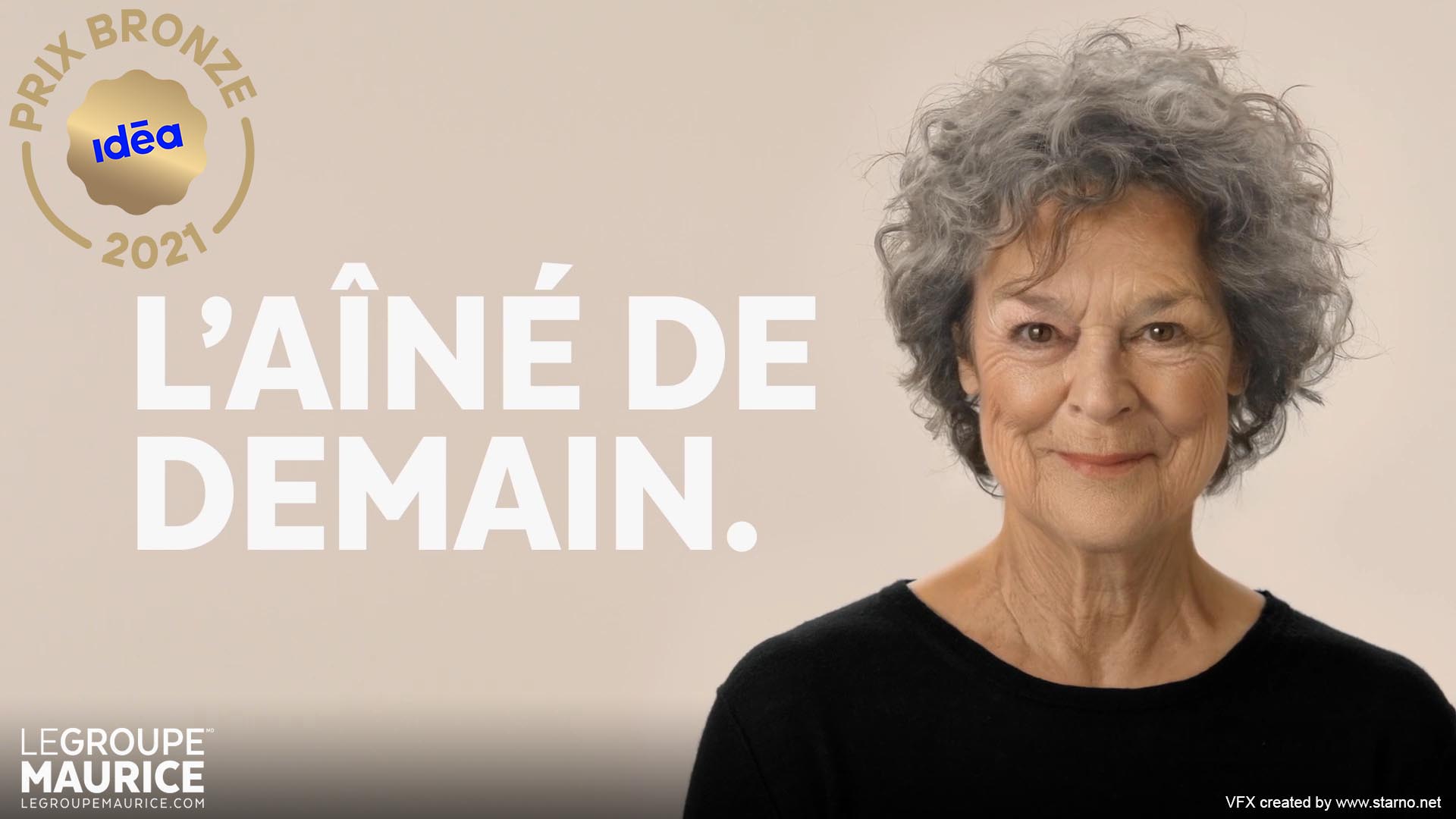 JUNE 2021: STARNO and Bifurk are the proud winners of an IDEA price in the 2021 Best Special Effects category, for the advertising campaign "L'ainé de Demain" - Groupe Maurice !
IDEA is one of the most prestigious advertising competition in Quebec ! Congratulations to the team ! We are very grateful !
Thanks to the help of several artificial intelligence and visual effects softwares, as well as a meticulous frame by frame digital retouching work, STARNO managed to beautifully recreate the CG aging of four comedians. In this project, close-up shots were a big challenge for STARNO. The strong lighting was not forgiving. Every wrinkle had to be precisely worked on in order to stay believable for the audience.
The project was also part of the Radio Canada ByeBye 2020 diffused in December 2020.

MARCH 2018: We are proud to announce that the movie 1991 from Ricardo Trogi is nominated for best visual effects at the Canadian Screen Awards this year. The creation of some historical environments was quite a challenge for the STARNO team. Trogi’s autobiographical trilogy, 1981, 1987 and now 1991 — referred to, somewhat cheekily, as the Trogilogie — presents three moments in his life in a way that certainly feels completely unvarnished. Trogi doesn’t look back on his life with nostalgia; he doesn’t make himself cool or, in some cases, particularly adept at anything. Trogi himself narrates the film (in a Wonder Years-like set-up) with a kind of blunt honesty that can sometimes make us forget that this is, by all accounts, an autobiographical story.

MARCH 2017: STARNO was invited to the Canadian Screen Awards 2017 in Toronto for best Visual Effects on the Neflix show Alias Grace, based on Margaret Atwood's novel, in pre-telecast award-giving earned Sarah Polley a best writing trophy and Mary Harron another for best direction. Celebrated Canadian writer Atwood, who received a career tribute during the ceremony, said the all-female creative team on Alias Grace meant "no one had to deal with the 'powerful man syndrome'" on set, in an often-repeated reference to the #MeToo movement and Time's Up initiative during the awards show.

MARCH 2016: STARNO created concept art images of the New York FBI Headquaters to visualize the set before the real construction was undertaken. A huge 12 feet backdrop of downtown New York in night time was digitally created. Quantico is an American television drama thriller series which aired on the American Broadcasting Company (ABC) from September 27, 2015, to August 3, 2018. Produced by ABC Studios, the series was created by Joshua Safran, who also served as the showrunner. Mark Gordon, Robert Sertner, Nicholas Pepper and Safran are its executive producers.

JANUARY 2016: STARNO contributed to the creation of concept art images to help to bring the story of Tom Clancy's the Division - The Fall of Canada to life. Tom Clancy's The Division is an online-only action role-playing video game developed by Massive Entertainment and published in 2016 by Ubisoft, with assistance from Red Storm Entertainment, Ubisoft Reflections and Ubisoft Annecy, for Microsoft Windows, PlayStation 4 and Xbox One. It is set in a near future New York City in the aftermath of a viral pandemic; the player, a Special Agent of the Strategic Homeland Division, is tasked with helping the group rebuild its operations in Manhattan, investigate the nature of the outbreak, and combat criminal activity in its wake.

NOVEMBER 2015: STARNO helped to create some historical set extension shots of the New York City hospital built in 1900. The Knick is an American television drama series on Cinemax created by Jack Amiel and Michael Begler and directed by Steven Soderbergh. The series follows Dr. John W. Thackery (Clive Owen) and the staff at a fictionalized version of the Knickerbocker Hospital (the Knick) in New York during the early twentieth century. Amiel and Begler write the majority of the episodes and are executive producers.

How to reach us

STARNO.net has stopped to operate since September 2021. This website and the media social sites will remain open but STARNO.net team will no longer be available for projects. Please use Linkedin.com private messages in case you want to reach out Frederic St-Arnaud. Thanks for your understanding.